Loganholme Locksmiths - BLINKY THIS! Story of an agro Koala.

Blinky THIS! The story of an agro Koala

It was Friday afternoon in a leafy sunny Brisbane suburb. My son came in the back door and said, "There is a Koala on the trampoline". I waited for the punch line. 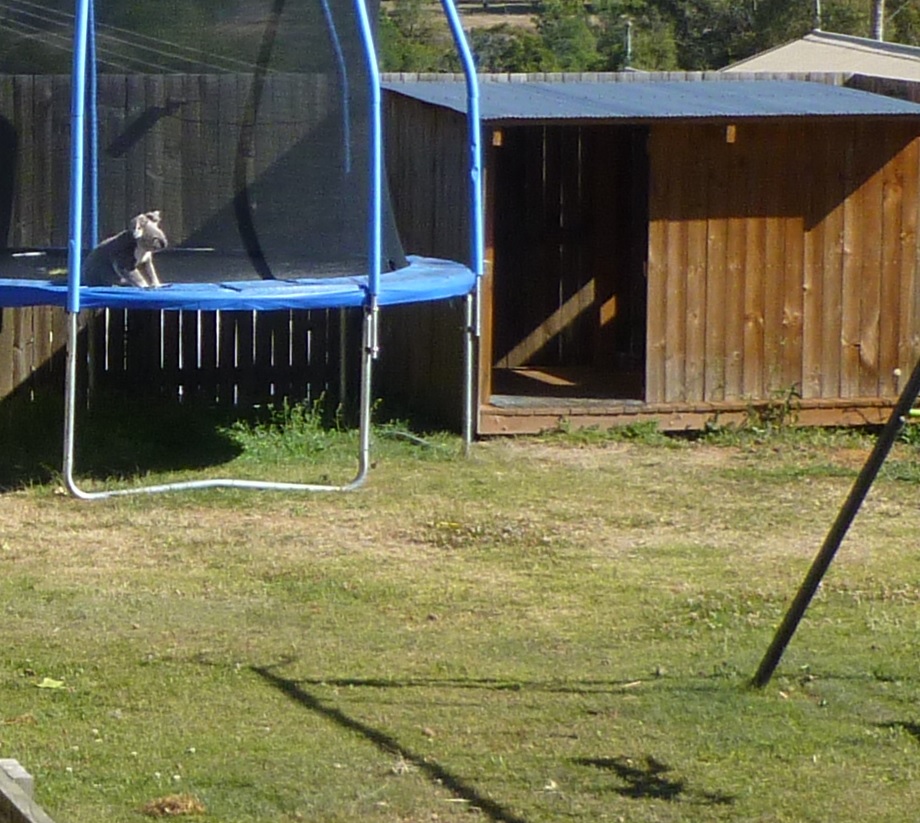 We have two dogs. Old Rosey, a very old female Red Cattle Dog, and Harry a large Black Wolfhound. The dogs kennel is next to the trampoline. As you can imagine the dogs were going crazy.

I have always thought of Koalas as quite docile animals that are rarely seen in the wild. My immediate concern was for the safety of the iconic native animal. We decided for the safety of our visitor it would be a good idea to chain the dogs to the set of swings in the middle of our yard until the Koala passes through.

While we were securing Harry, The Koala had bailed up Rosey the old Cattle Dog around the side of the house. My son rushed to her aid. The dog has been around as long as he had been. He shooed the Koala away from the old dog towards the fence. He then grabbed the old dog by the collar and escorted it back to the yard and hooked it up to the swing set. The Koala remained on our side fence before disappearing. 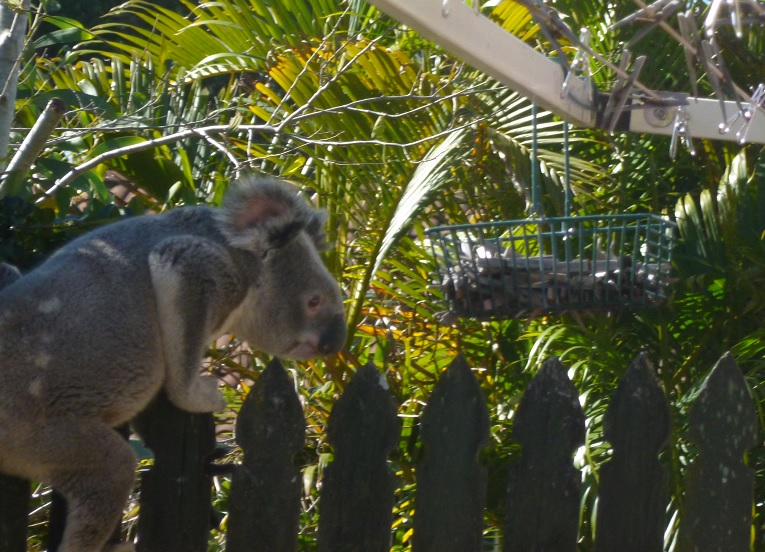 I looked around the perimeter of our yard to make sure the Koala wasn't still in the yard before releasing the dogs. There was no sign of the Koala anywhere. We had assumed the Koala had left the yard. We were happy to see the Koala had left the yard and we were hoping it was able to find a nice gum tree somewhere in the neighbourhood to climb up. I thought we had seen the last of the Koala. It was nice to see one so close up. My opinion of the animal as cute and cuddly remained in tact. This would continue until approximately 11:30pm that night.

LATER THAT DAY... It was nearly midnight and the dogs were going off their brains. There was a lot of barking and loud grunting sounds coming from the dog house. I was asleep at the time this had started. My son knocked on my door and told me that the dogs were "REALLY GOING OFF!!". I grabbed a torch and we both went down the back of the yard to see what was happening.

I chained the dogs up for the evening to stop them from becoming nuisances and to allow wildlife (such as Koalas), to pass safely through our yard. The dogs were outside of the kennel barking towards it. I shined the torch at the entrance to the kennel only to see that same Koala standing guard. It appears that the dogs have been evicted by a 13kg Koala. The Koala is just sitting there, like a bouncer at the entrance of a nightclub. It was going nowhere. I don't know much about Koala body language but it appeared to be taking ownership of the dog kennel. As this was happing, the dogs were really in a state. They were chained to the dog house on a 3 meter chain. This would normally allow them enough movement but now we had the furry intruder, this had to be immediately reassessed. The wolfhound Harry felt emboldened by my presence and decided to approach the Koala. This wasn't a good idea.

As Harry drew closer to the Koala, in a flash the Koala leapt up 2 feet into the air like Yoda from Star Wars and hooked its claws into the Wolfhound and pinned the 40kg dog to the ground. Both my son and I were stunned by what was unfolding. Neither of us had seen anything like this before. A MMA fight was taking place between a Koala and a Wolfhound and the Koala was going for the pin. It took a good 10 seconds to come up with a course of action to separate the animals. I decided to unchain the dogs from the kennel and relocate them to the swings and hopefully in the process separate the Koala from Harry. Fortunately this worked. I finished tethering the dogs to the swing set and the Koala returned to his new home, the dog's kennel.

The dogs were continuing to lose it. Harry in particular was very upset. My son and I were looking at each other, both thinking "WTF is happening?". While we were standing there dumbfounded, the Koala was declaring its intentions. "This is my kennel, you can leave now".. It looked like a Mexican standoff was unfolding. My son stood there hose in hand and I pointed a torch at the Koala and called the RSPCA. As we waited for the RSPCA to arrive we all waited, and looked at each other. The Koala barely moved. This standoff continued for approximately 30 minutes until reinforcements arrived. Just after midnight a lady from the RSPCA arrived. She was a volunteer who gives up her time to rescue Koalas all hours of the night. This lady had just finished rescuing a baby Koala that lost its mother after it was hit by a car nearby. But our Koala didn't need rescuing, we did.

The RSPCA lady swiftly took charge of the situation. She had a large cage and a blanket. I said to her, "Have you done this before?". "All the time", she replied. She was amazing. The Koala expert approached the Koala and dropped the blanket over it. Then she picked it up and popped it in the cage. During this time, the little tyrant decided to make some noises that sounded like the predator. The RSPCA lady replied to the Koala, "Aww don't be like that". The lady took the Koala away to be treated. It looked little worse for wear from the encounter. Harry the wolfhound had a number of scratches on him. 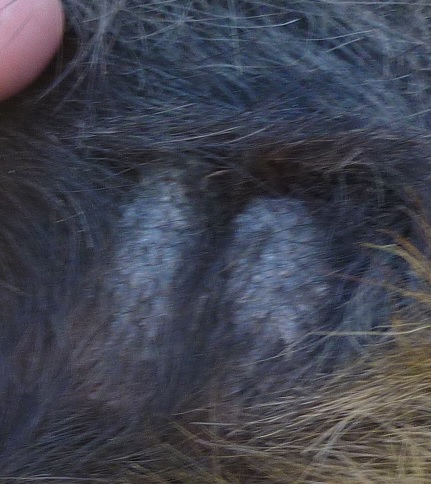 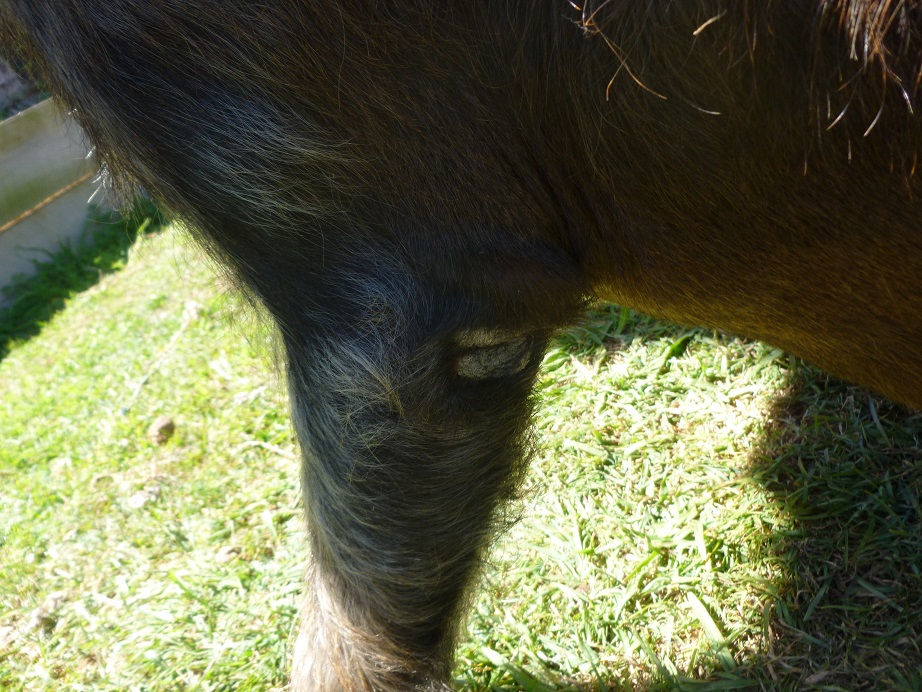 We now have very different opinion about the Koala. Leave them alone. I have also gained great respect for the volunteers and staff at the RSPCA. They give their time to help animals, 24 Hours a day. Thank you RSPCA. 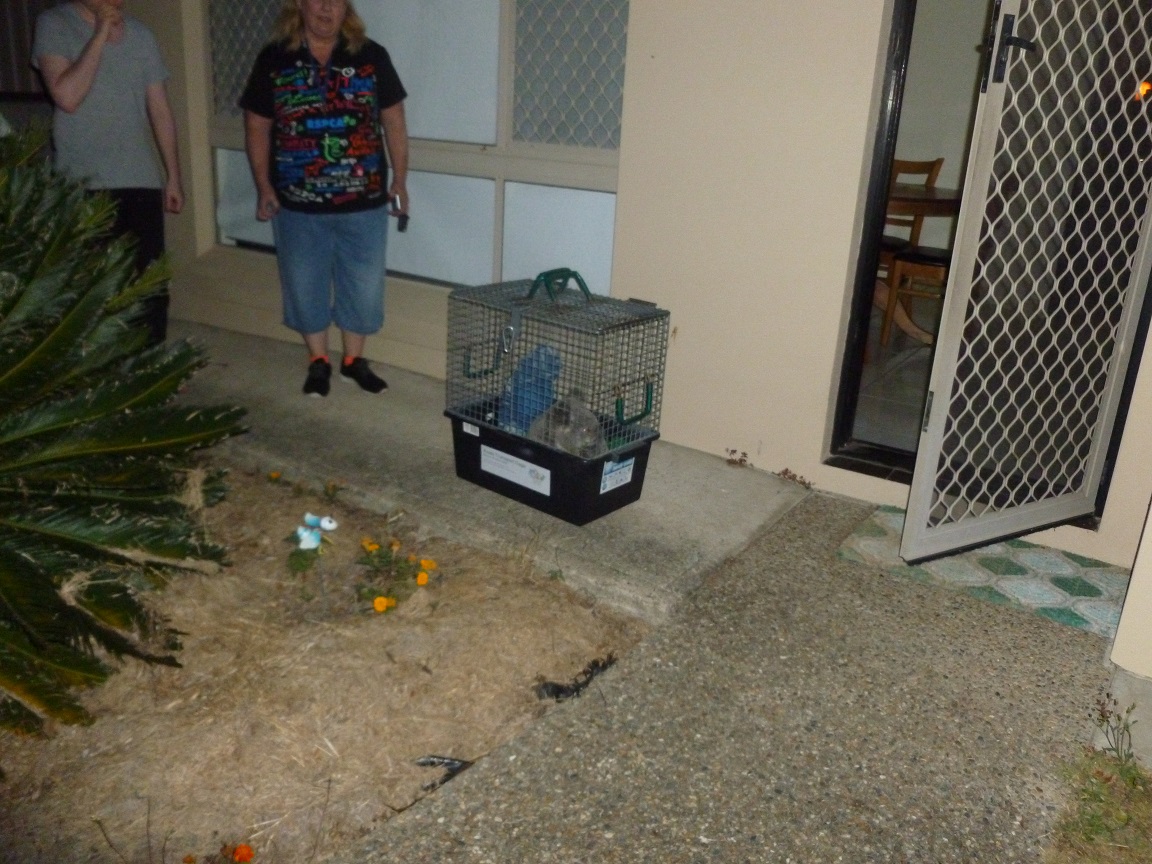 Report by Colin Devenish - Based on Keith Devenish's version of events that occured on September 8th 2017. All images by Keith Devenish.